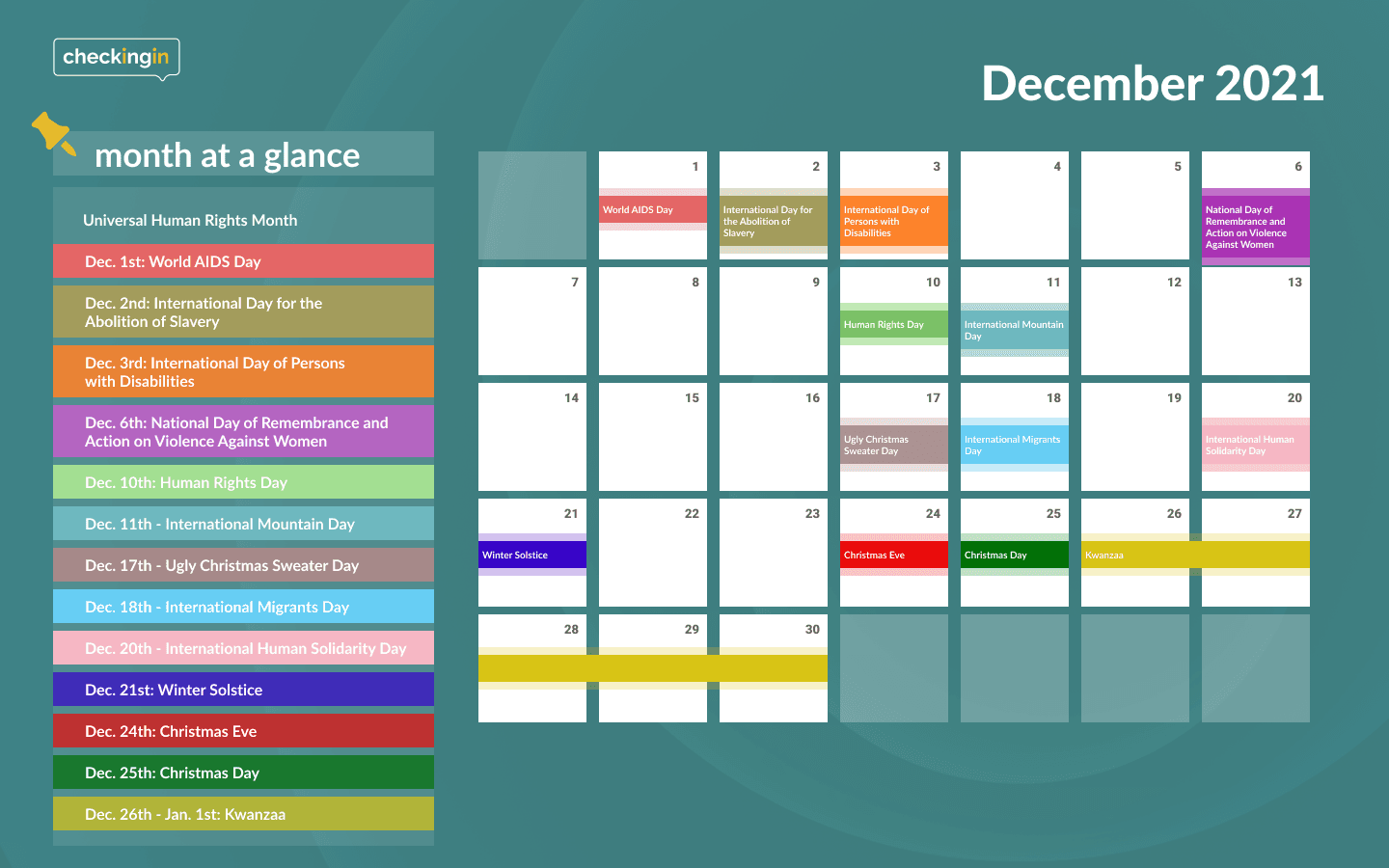 Important dates and employee engagement ideas for the month of December.

World AIDS Day is dedicated to raise awareness about HIV & AIDS prevention and to remember those who have died from the disease. An estimated 40 million people worldwide have died of AIDS since 1981 and an estimated 37 million are living with HIV, making it one of the most important global public health issues in recorded history. People living with HIV and AIDS are at higher risk of developing mental health conditions due to the barriers to managing and accessing medical support along with the stigma and discrimination they face on a global scale.

International Day for the Abolition of Slavery - December 2nd

International Day for the Abolition of Slavery is about raising awareness and reinforcing global efforts in combatting modern slavery. According to the International Labour Organization more than 40 million people worldwide are victims of modern slavery.

This day is to celebrate persons with disabilities and also bring awareness to the challenges that they face throughout the world. The spirit of the day is to ensure that all people in the world have equal opportunities for work, play, health and success. This year's theme is "Fighting for rights in the post COVID era."

The National Day of Remembrance and Action on Violence Against Women, also informally known as White Ribbon Day, is a day commemorated on the anniversary of the 1989 École Polytechnique massacre, in which fourteen women were murdered and ten others injured in the name of "fighting feminism."

Human Rights Day commemorates the day on which the United Nations General Assembly adopted the Universal Declaration of Human Rights (UDHR) in 1948. The UDHR is a milestone document, which proclaims the inalienable rights that everyone is entitled to as a human being. This year's theme is: EQUALITY - Reducing inequalities, advancing human rights.

In 2003, The United Nations General Assembly designated December 11th as "International Mountain Day", to create awareness about the importance of mountains to life. This year's them is: Sustainable Mountain Tourism.

Bundle up in style! Whether you're back in the office or working from home, you can still have some fun and rock your most charming holiday sweater.

International Migrants Day aims to raise awareness about the challenges and difficulties of human migration.

Winter Solstice marks the shortest day of the year, the end of fall and the official start of winter. It's an ancient pagan holiday known for rituals and traditions that celebrate nature, the return of light and setting one's intentions for the coming season.

Though the holiday season is a time that is often spent with your loved ones, it can also be a great time to celebrate and engage with your team. Here are some fun ideas to engage in leading up to the holidays.

Beginning on December 26th and lasting for seven days, Kwanzaa is a celebration of community, family and culture, established as a means to help African Americans reconnect with their African roots and heritage.

Seven ways to reduce holiday stress in the workplace