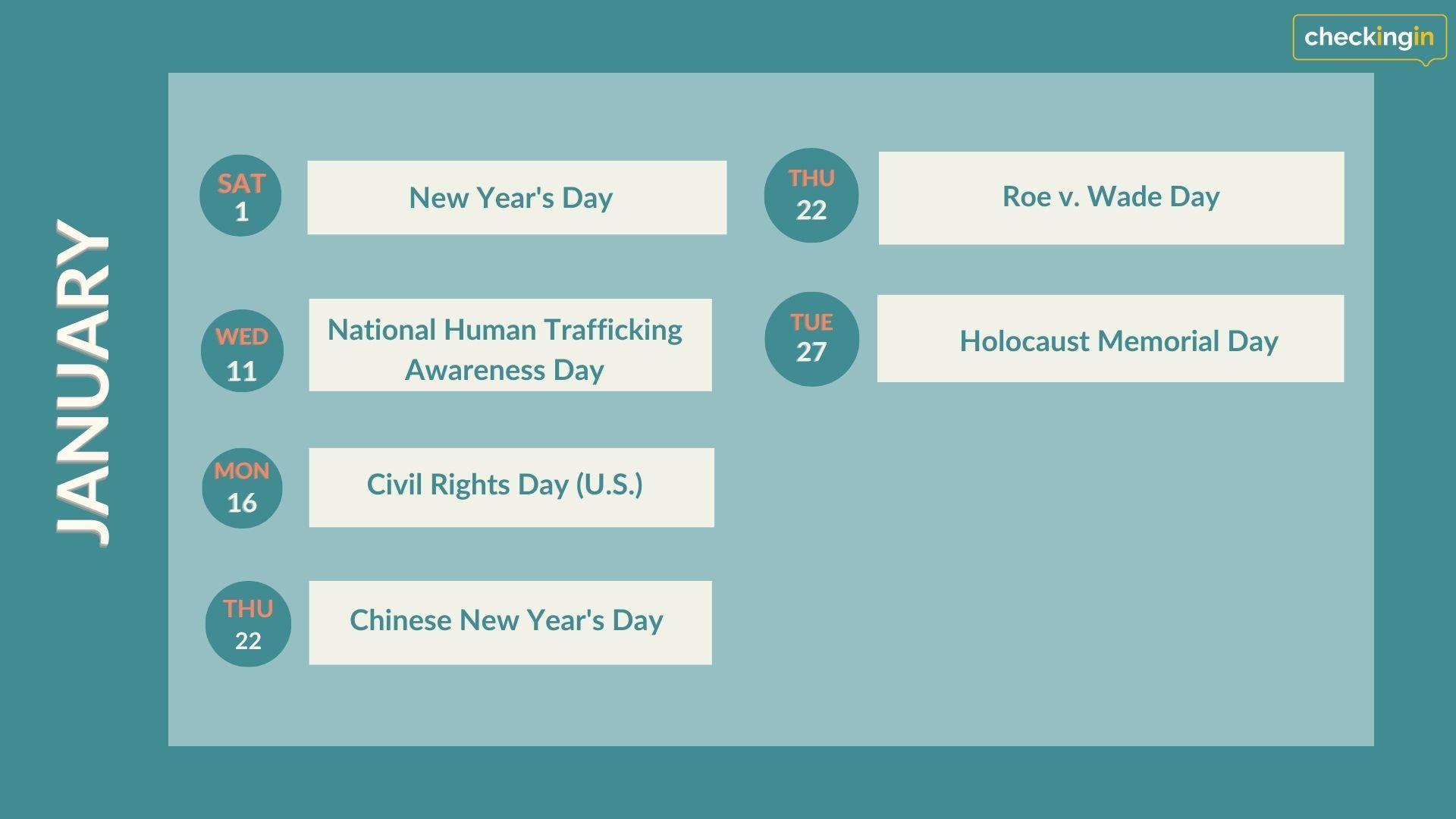 Important dates and employee engagement ideas for the month of January.

January 1st marks the first day of the Gregorian Calendar. Those who follow this calendar often celebrate the coming of the new year by spending time with friends, and family, bonding over food and drink, and reflecting on the year that's gone by. You and your team may wish to set intentions for the year ahead.

The International Labour Organization estimates that there were 24.9 million victims of human trafficking globally this year. Raising awareness around the impact of human trafficking, its victims, and its prevention is more important than ever. In an effort to raise awareness, January 11th has been named National Human Trafficking Awareness Day in the United States.

In the United States, the third Monday in January marks 'Martin Luther King Jr.' or 'Civil Rights' Day. This holiday commemorates the efforts of Martin Luther King Jr. to end segregation, racism, and legal inequality in the United States. As we continue in the fight to protect black lives, this day reminds us to remain conscious of the continued persistence of racism in America.

In Chinese culture, 2023 is the year of the rabbit! Traditionally, this holiday is celebrated with fireworks, delicious food, lucky red envelopes, and well wishes for family, friends, and the community.

On January 22, 1973, the US Supreme Court granted women autonomy over their bodies by legalizing abortions on a national level. The fundamental right to choose was thus federal law, but unfortunately, recent US Supreme Court decisions have overturned Roe V. Wade, giving each state the power to decide its stance on abortion. This decision has been a major step in the wrong direction for the equality movement, violating the human right to autonomy over one's body. This year, we encourage you to show solidarity with those living in the United States and fighting for their agency.

Holocaust Memorial Day is observed each year on January 27th. It commemorates victims of the Holocaust, the genocide of over six million Jewish people and other minorities in Nazi Germany between 1941 and 1945. Remembering those affected by the Holocaust is crucial in the continued efforts toward reconciliation and to prevent such tragedies in the future.
Engagement Ideas